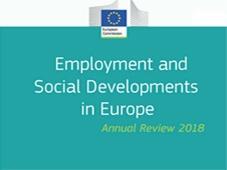 This year’s review by the Employment and Social Developments in Europe has confirmed that there is an improvement in a social situation while the labour market is showing a positive trend. The employment level has reached new record levels, with the number of people having a job touching the 238 million mark, which is an all-time high in the EU.

However, in spite of a growth in the number of hours worked per person in recent years, the figure is still below the 2008 levels. The review also pointed out that the disposable incomes have seen a rise while the poverty levels have gone down. There has also been a recession of various material deprivation to an all-time low, with the number people affected going down by 16.1 million people in comparison to 2012. The rapid technological developments and their impact have led to uncertainties about the effects of digitalization and automation in the future. This is the reason for the 2018 ESDE review focusing on the changing world of work.

As per a senior Spokesperson, the economic growth in Europe is quicker and more uniform than the previous years. This has had a positive impact on household incomes while improving social situations. The potential for growth of job creation with the changes in technology is quite high, though this could be achieved only if the changes are shaped.